Rae Johnson’s entrance into the life of the Brotherhood of Journeymen Linemen can only be described as one of sweet serendipity –good fortune discovered when you’re not searching for it. And from that happy coincidence, her life has fallen together in ways that have allowed her to take her luck and pay it forward to help other families in need of their own serendipitous events.

The journey started when Johnson was just 18 years old and was in need of a job to help support both her and her mother, who had cancer. She answered an ad in the local paper and got a traffic flagger position with her IBEW local 126 in Pennsylvania in 1997.

“It was a fluke” said Johnson.

She decided to apply for an open tree trimming position next and then moved up to an outside construction opening in 2000. Unfortunately, her mom did pass away and her dad was living out of the country, so Johnson had to learn to survive on her own. Little did she know her first union job would come attached to an entirely new family. Both a brotherhood and sisterhood in a literal sense that would be able to take care of more than just her paycheck, it would help protect and provide for her the rest of her life.

“I was young and naïve but the job was good and had a good salary,” she said.

In 2002 she continued to push herself and got her traffic tech license which is when she met her husband, Tom, while both were working for a contractor in Philadelphia. Johnson decided to fix her sights on her next goal with a 4 year training program to become an Apprentice Lineman. It takes a special type of woman to dedicate herself to the line trade due to the rough physical requirements and long hours away from home but Johnson found it to be a welcoming challenge.

In order to practice her climbing skills her and her future husband would go climbing for fun together, which is when she realized his 6’4” stature allowed him to climb a pole in about 10 steps. He was a natural climber and had no fear of heights, which were excellent skills to become a lineman. Johnson convinced him to join her trade and start the apprentice lineman program as well.

As fate would have it in 2004 Johnson fell about 40 feet while coming down off a pole and damaged her right wrist, elbow and shoulder. After 2 years of physical therapy her doctor told her she wasn’t able to work anymore in the career she had found so fulfilling. In the meantime, her husband had started his path to becoming a lineman, which allowed his wife to take care of her health when it was time to hang up her hooks and focus on raising their two daughters, Amber and Alexis.

Her time at home allowed her to join some lineman support communities on Facebook so she could communicate with fellow line wives across the country. While in an IBEW chat room discussion, she read about a lineman from the Northeast who died from falling 90 feet off a pole. The discussion group talked about fundraising for his family but couldn’t find any organization to easily donate their efforts to. This event is what sparked Johnson on her path to create the National Sisterhood United for Journeymen Linemen, NSUJL, a 501c3 non-profit organization specifically for fallen/injured Linemen.

“Somebody had to do it!” she said.

Johnson took the lead to organize the group but said it took the dedication of 12-15 wives to keep it progressing forward in the beginning. The organization exceeded its own expectations for its startup year, which has motivated them to keep pushing forward for growth.

Being a lineman is a great career and the trade is very rewarding but it comes at a price. The more our country’s electrical needs grow, so do the accidents in the operations behind maintaining the lines.

“You are safe if you follow the rules and regulations, use safety equipment and do what you are taught, but human error is normal and error in this line of work can be fatal,” she said. “Linemen are the unsung heroes of our country and are deserving of all the same recognition as many other community based professionals.”

Johnson was very disappointed when she searched for and couldn’t find an organization to donate to. Families in need are left without income, without hope and often feel alone, confused and overwhelmed. “Pass the Hat” type of donations existed around the country for local accidents but nothing nationwide had been established. Many line wives, like Johnson, are fortunate to have their husbands career support the family so they can stay home and Johnson felt that it allowed her the opportunity to give back to her extended family.

“Everyone wanted to help but didn’t know how,” said Johnson.

She decided to lead the way to make donations as easy as possible. Monetary donations are important since the official funds from insurance take about six months but NSUJL gives an even more “hands-on” assistance to help families.

“We help with household chores, home cooked meals, midnight phone calls and whatever else they might need,” Johnson said.  They also have scholarships available for the children of fallen linemen. The goal is to help the family regain stability and control for the future.
The organization is a little over a year old and successfully applied for and received the 501c3 status and also just recently got the formal endorsement of the IBEW and many other local unions and corporate sponsors.

“It all happened so fast. We went from just a bunch of wives on a Facebook chat room to running a nationwide organization,” said Johnson.

For most, hitting those goals would be enough but not for Johnson who is the daughter of a US Marine. Her father has been an electrical engineer since 1978 so there is a family history in the electrical industry.

“You never settle, you meet goals then you make new goals, you never stop!” she said.

Johnson said she felt like she was on the right path when the group met Donna, a line wife whose husband was killed in the line of duty. The NSUJL director for the Southeast and the Tennessee Rep showed up at their house and assisted where needed. Johnson was able to confirm that having a lineman’s wife talk to another wife in need was an instant bond and feeling of “family”. They all share an unspoken knowledge of the trade and have an immediate friendship and sisterhood relationship.

“At this point I knew we were going in the right direction and just needed to keep going,” said Johnson.

So far they have been able to directly help 17 families of linemen who were injured or have passed. NSUJL currently has over 140 members and is always accepting personal memberships, as well as, corporate sponsorships. The organization needs to continue to grow in order to keep helping more families. It is a group made up of all volunteers and has a presence in each of its six regions of the country. A basic framework has been established as to how the group reaches out to those in need. With growth comes the need for more volunteers from every state so they can answer any request when called.

“We need people willing to donate time and to be able to contribute to the Brotherhood when called. I want to see us help as many families as possible and continue to fundraise,” she said.

This year the group will attend 12 rodeos around the country to inform the industry about their mission and recruit new members. They are also hosting their own rodeo at the end of May in Pennsylvania to honor those who have fallen in the line of duty and to raise funds for their families. NSUJL has also started selling cookbooks with line wives favorite recipes, along with clothing and jewelry specifically for the trade.

This summer, Johnson is getting ready to give birth to her next big project, a baby boy due in July!

“We are growing our own little future lineman,” she said proudly.

Johnson’s husband currently works on a 500 Transmission line in Northeast Pennsylvania with T&D Power through IBEW local 1319 and they both couldn’t be happier about their career choices and how life’s unexpected twists have set them up for success. And now that NSUJL is up and running smoothly, Johnson can look forward to focusing on having the baby who will travel with her and her husband to the International Lineman’s Rodeo in Kansas in the fall. Dad will compete while mom and son cheer him on and work the booth for NSUJL. For more information on NSUJL and to see how you can help please visit their website at www.NSUJL.org.

NSUJL is Looking for YOU! 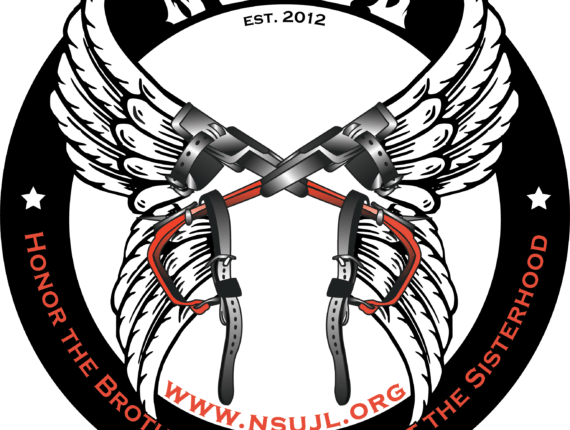